He was only 21 years old when he conquered Everest, becoming the youngest australian who archieved this performance. At the same time skydiver, BASE Jumper and the pilot of a unique aircraft – a jet wing designed and built by him and his friend, a farm equipment mechanic, Rex Pemberton registers into the category of characters who make history, in Aviation and beyond.

Rex raised in Sydney and met with adventure at a low age, when he was 8 coqueering the heights of the mountains with his brother. At 16, he climbed the mountains of Peru, and later, he reached the highest peaks on each of the 7 continents.

Meanwhille, despite he was educated to avoid falling, the though of slipping into the void began to attract him more and more, which is why he dressed wingsuit flying and found satisfaction of this type of flight. One dangerous, but calculated.

Currently, Pemberton is a motivational speaker, putting his experience, wisdom and vision in presentations designed to inspire people around him. When he’s not in front of crowds, he works for his goal: evolving human flight.

I chatted with the australian, trying to find out more about how Aviation it looks from his perspective, and also what tips he can give for the participants of my workshop, #IamNotAfraidToFly.

How did Aviation appeared in your life? When?

I always have had a passion for flight. While mountain climbing I started paragliding and then learn to skydive. I then pursued my fixed wing pilots license. Ever since I look my first flight on a paraglider I fell in love with flight.

I know you are also a proximity flyer. How did you decided to do this?

I loved the idea of flying my body down the side of a mountain. It’s something very very special. As a climber I was always taught to hang onto the rock and mountain, however it felt so good to let go of the fear of falling and fly.

The experience is like no other in this world. Saying that I am a very cautious proximity flier. To surive BASE jumping you have to be as educated as you can be in glide ratios, the way air masses and currents move around mountains, weather changes such as tempature and humidity all come into play and should affect your decision making.

Did you have any problems during a BASE Jump?

In BASE Jumping, I have had many near misses, 180 degree openings on under-hung cliffs, bad landings as a result of low objects and opening heights, but that was all in the first 3 years of BASE Jumping. I feel in my 13 years in the sport I have matured enough to minimize the risk and thus I haven’t had any major problems for broken bones yet. 🙂

What was the most beautiful BASE Jump did you had?

I climbed the Eiger to the summit and then did a wingsuit jump from just below the summit on the north face. I flew for about 3 minutes back to the town of Grindelwald. That was an amazing day!

How did you reached from a wingsuit to a jetwing?

I always dreamed about getting more performance from my wingsuit, gliding further, faster and being able to sustain flight.

The Xwing Project came to me when Felix Baumgartner became the first person to glide across the English Channel. Felix used a rigid un-powered carbon fiber wing strapped to his back. Shortly after Felix’s success, I became aware of Yves Rossy (Jet Man). Yves had designed a rigid wing with turbine power capable of sustained flight, a design he had worked on for eight years. As a wingsuit pilot and airshow performer I knew instantly that I wanted to fly a rigid wing. To fly effortlessly through the sky, trade airspeed for altitude, climb, roll, and loop was a fantasy I could not get out of my head.

To fly a rigid wing is a long journey. It combines skydive knowledge with fixed wing aviation knowledge. I had the skydive experience but I did not have the fixed wing aircraft experience.

So I learnt to fly fixed wing aircraft. I became a private pilot on the 1st of June 2012. This was the first step towards achieving the dream. I logged about 300 hours of fixed wing flight, before taking action on the rigid wing project. At first I approached some very large aviation composite companies and quickly decided it was not feasible to pay the excessive sums of money for research, development & design. So I decided I could build the wing on my own.

I mentioned the idea of making a rigid wing to my good friend Jason. As a building contractor and flight instructor, Jason loved the idea instantly and wanted to be part of it. Jason then introduced me to a farmer that lived close by called Bob Nascimento. Little did I know at the time, but Bob a humble farmer would make the project come to life.

By day, Bob builds parts of machinery to work on farm equipment. His workshop is messy, cluttered and dark yet there in the middle of the room, collecting dust was an old CNC machine sitting alongside an ancient looking PC computer and a series of drill presses, lathes and an eclectic mix of other interesting machinery. It was in his workshop, just outside of Turlock California that Jason, Bob and I designed the wing.

Fueled by passion, we worked many late nights over the next 2 years. We built the wing, step by step working through the complexities, the obstacles and the hurdles. We designed and integrated the winglets, built control surfaces, carbon fiber panels and harness hard-points.

Finally the wing was created, we then integrated parachute systems with parachute container designer Kelly Farrington from Velocity Sports Equipment. The wing was complete and ready to test glide.

We are now on our 13th version of the wing! We have integrated KingTech turbine fan engines and can sustain flight for about 15 minutes and travel about 160MPH.

How it feels to fly it?

The first time a flew the wing, I had to pinch myself many times. It felt unreal. I could not believe I could fly my body around the sky like a human rocket, like Iron Man!

But it’s possible and it’s an amazing feeling! I am now putting twice the amount of power on the wing so we should be able to climb vertically.

What is Aviation for you?

Aviation for me is a sense of freedom, a place where I am always happy. A place where I see the world from unique preservatives and I feel so honored to be able to experience that as an individual but also with my closest friends.

What are the 3 most important things you learned through Aviation?

What is the most fun moment you lived in the air?

The first time I flew the Jetwing under turbine power.

But the most dangerous?

Some of the initial test flight on the Jetwing. There is no flight manual for it!

How did you managed it (the dangerous one)?

Think clearly, calm the mind. Trust your ability and execute the task.

What are your fears when you are in the air and how do you control them?

While doing risky activities, I am always afraid, but I think fear helps keep you alive. It tells you that your are at the edge of your comfort zone.

I am afraid of making a silly mistake, so I always create a jump plan before i exit the cliff and stick with that plan. I don’t make last minute changes to fly down a gully or over a ridge I don’t know or haven’t flown over before. I will always fly high over the mountain first to take a good look at the terrain.

I also fear equipment failure, so I do all I can to buy and maintain my equipment. Sometimes I fear other jumpers, some people can be reckless and don’t appreciate the risk and danger involved in BASE Jumping.

If you have the opportunity, what are the advice you would give to your ego when you started to fly?

Good question! I would tell myself that I don’t know everything and every flight is a learning experience.

Do you have a motto that inspires you in what are you doing? 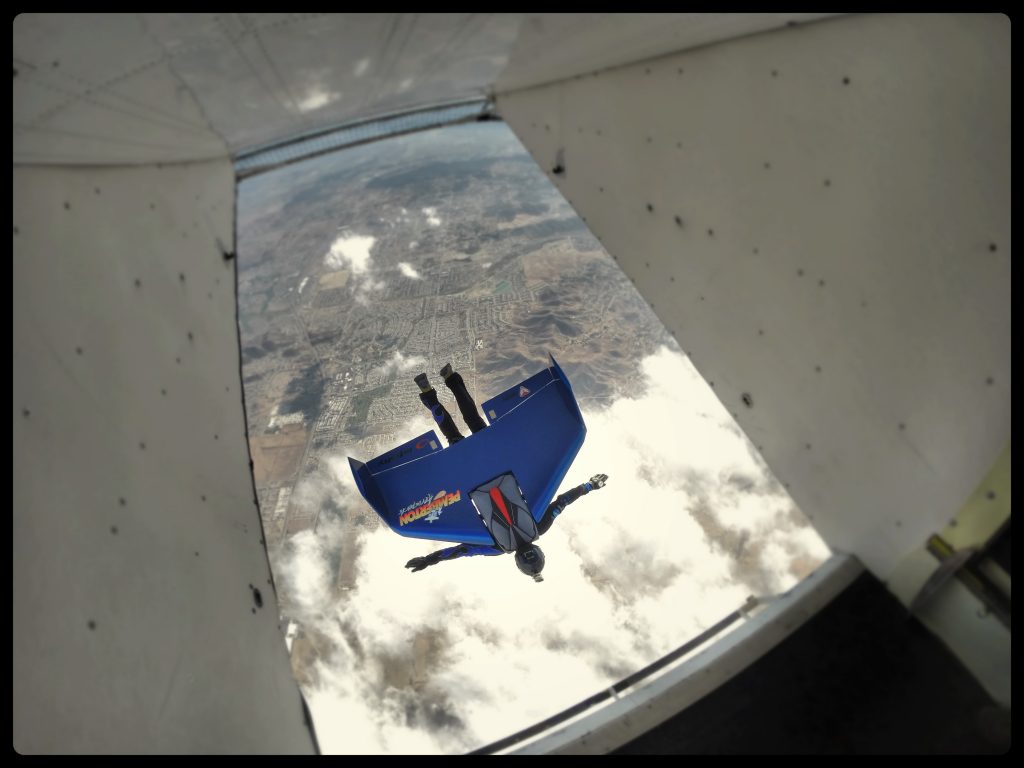 But a pattern, a model?

What’s the story of your Everest climb? How did you decided to conqueer it?

I climbed my first mountain at 16 years old in Peru. Coming from a rock climbing background I loved climbing. I set the goal to go to Everest on the summit and I worked towards building up the experience. At 18 I started to look for sponsors. By 21 I had raised over $100,000 to support the expedition and spent 3 months climbing the Mountain. With a great team behind me, I was lucky enough to push hard and stand on the summit on the 31st of May 2005.

What was the most difficult part of the climb? How did you overcome it?

The summit day, It was very cold 50 degrees below and the wind was very very strong. Physically the conditions made it very difficult. I wanted to give up. I told myself if I turned around I would regret it so I pushed on! I think it’s the mental ability to tell your body you can do it and then it’s amazing what you can do when you are fully committed.

In many cases, the human body can do much that we think/know, but the brain says no. What could we do so that we can convince our brain to push the limits?

Achieving most large goals I think is 60% mental strength and 40% physical. It’s much easier to say, It’s too hard, I am too old, too young or don’t have the time. Most of the time we will shut the dream down before we even begin. It’s your passion and desire that will allow you to achieve.

As we speak about self-sabotage, I organize a workshop about fear of flying. What would be your advice for a person who fears of flying?

Relax, most of the fear is in your mind, a fear to fall… Air is a fluid, with the right wings it will hold you up and take you to amazing places to have great adventures.  Big commercial aircraft these days are very reliable and quite safe.

What are your plans for this year speaking about Aviation?

It’s for businesses it will help them understand how to innovate effectively. It looks through the lens of a my story as a test pilot and how we go about designing, building and testing something completely unique. I think test flying and Innovating in business are very very similar concepts.

I will be delivering the talk for the first time at the end of this month and then about another 6 more times this year.

If you want to learn more about Rex Pemberton, or to be in touch with what he is doing, you can follow his Youtube channel or his Facebook page.